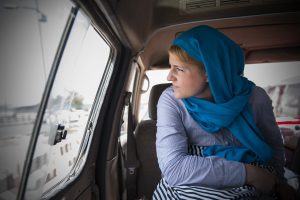 Lauryn Oates, the projects director for Canadian Women for Women in Afghanistan, travels the country assessing the NGO’s teacher training programs and promoting literacy and gender equality among men, women, girls and boys.

In 1996, at age 14, Lauryn distributed a petition demanding world action on the treatment of women and girls by the Taliban. Today she is the Executive Director of Canadian Women for Women in Afghanistan, a charity that has trained 10,000 teachers, and runs a network of village libraries and basic literacy classes for girls and women. Lauryn has also worked throughout the developing world, with UNICEF, USAID, WUSC, the Nike Foundation and others. She created the first online library for teachers in Afghanistan, Darakht-e Danesh (‘knowledge tree’), which was awarded a Presidential Citation by the American Library Association in 2018. Coverage of her work in Afghanistan has been featured in both national and international press.

The Globe & Mail named Lauryn as one of the 10 Canadians to watch in 2008, she was awarded the Queen’s Diamond Jubilee Medal and the Royal Roads University Leadership Award. Lauryn holds honour/master degrees in International Development Studies, Human Security and Peace Building and a PhD in Language and Literacy Education. She has twice been awarded a Social Science & Humanities Research Council award and currently teaches graduate students in the School of Humanitarian Studies at Royal Roads University. 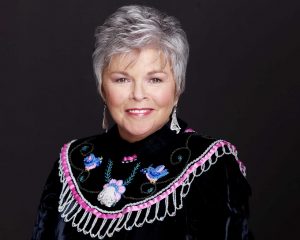 We are thrilled to have Roberta Jamieson as our speaker as she is the first First Nation woman in Canada to earn a law degree; the first non-Parliamentarian appointed an ex-officio member of a House of Commons Committee; the first woman Ombudsman of Ontario; and the first woman elected Chief of the Six Nations of the Grand River Territory. An accomplished expert in alternative dispute resolution, Roberta also served as Commissioner of the Indian Commission of Ontario.

Roberta is President and CEO of Indspire, a charity that disburses scholarships and bursaries to support Indigenous students in post-secondary education. There is also a K-12 Indspire Institute that supports educators and communities to improve educational outcomes with culturally grounded curriculum.

Roberta is an Officer of the Order of Canada, has been presented with numerous awards and honourary degrees and is a member of Gender Equality Advisory Council for Canada’s G7 Presidency.

Find out more about Indspire and the work they do at www.indspire.ca 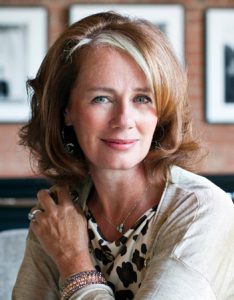 We are delighted to have Arlene Dickinson as our speaker for this year’s event.

“The purpose of marketing is to deliver business results,” says Arlene Dickinson, renowned CBC “dragon” and one of Canada’s most successful communications entrepreneurs.  Whether explaining how to leverage marketing in even the toughest of economic times, sharing backstage stories from “The Den,” or giving audiences a look into her personal story of success, Dickinson’s experience and expertise always shine through.

Dickinson is one of Canada’s most renowned independent marketing communications entrepreneurs.  As CEO of Venture Communications, her creative and strategic approach has turned the company into a powerhouse with a blue chip client list.  She is also the CEO of District Ventures Capital a fund investing in Canadian companies in the food and health sectors.

Dickinson is best known to Canadians as one of the venture capitalists on the award-winning series Dragons’ Den, an investor on The Big Decision, and a judge on Recipe to Riches.  She is the author of two bestselling books — Persuasion, and her most recent bestselling release, All In.

Her success and leadership has been recognized with multiple honours and awards including Canada’s Most Powerful Women Top 100 Award, the Pinnacle Award for Entrepreneurial Excellence, as well as being recognized with PROFIT and Chatelaine magazine’s TOP 100 Women Business Owners Awards.

Dickinson is an Honorary Captain of the Royal Canadian Navy and is the recipient of honorary degrees from Mount Saint Vincent University, Concordia University, Saint Mary’s University and NAIT.  She is a recipient of the Queen Elizabeth Diamond Jubilee medal.  She also sits on numerous public and private boards and is dedicated to giving back to her community and country.

We are delighted to have Candy Palmater as our speaker for this year’s event.

Candy is a recovered lawyer turned feminist comic who was raised by bikers in the wilds of northern New Brunswick. She is an activist, actor, writer, international speaker, and award-winning TV and radio personality, and has executive produced three films on Mi’kmaw culture.

Candy is the creator and star of her own national, multiple award-winning TV series, The Candy Show (APTN). She has a role on the Trailer Park Boys S10 (NETFLIX), appeared in Call Me Fitz (HBO Canada) and Sex and Violence (OutTV), and received a Screen Nova Scotia nomination for her role on Forgive Me (Superchannel). She’s a columnist with CBC Radio’s The Next Chapter and also guest hosted DNTO and q, and Has her own summer daily National radio show, The Candy Palmater Show.
Candy has written and hosted many broadcasts including Ab Day Live, the Indspire Awards, and the imagineNATIVE Film Fest Awards Show.
Candy was valedictorian of her class at Dalhousie Law School and went on to practice Labour and Aboriginal law in a large corporate firm until show biz came knocking.

Before pursuing entertainment full time, Candy directed First Nations education for the Nova Scotia Department of Education for a decade. She is currently working on a Masters of Education at St. Francis Xavier University and has taught in the Transition Year program at Dalhousie University.
Candy spends most of her time in airports and airplanes as she travels the globe speaking to audiences, large and small, about the power of love, kindness and self-acceptance. Candy believes we are more alike than different and that you can NEVER have too much Candy. 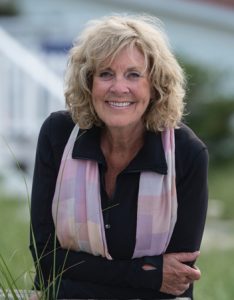 We are delighted to have Sally Armstrong as our speaker for this year’s event.

Human rights activist, journalist and award-winning author Sally Armstrong has covered stories about women and girls in zones of conflict all over the world. From Bosnia and Somalia to the Middle East, Rwanda, Congo and Afghanistan, her eyewitness reports have earned her awards including the Gold Award from the National Magazine Awards Foundation and the Author’s Award from the Foundation for the Advancement of Canadian Letters. She received the Amnesty International Media Award in 2000, 2002 and again in 2011.
She was a member of the International Women’s Commission, a UN body, made up of 20 Palestinian women, 20 Israeli women, and 12 women from other nations whose mandate is assisting with the path to peace in the Middle East.

In 1996, the YWCA of Toronto honoured Sally by awarding her the prestigious Women of Distinction Award in Communications. She received the Achievement Award for Human Rights for Women from Jewish Women International in 1997, Media Watch’s Dodi Robb Award in 1998, and, in 2003, the Foundation Award for Outstanding Achievement from the National Magazine Awards Foundation. In 2005, she received the Athena International Award (Chicago), the World of Difference Award from the International Alliance for Women (Florida) and the Red Cross Humanitarian Award – New Brunswick Region. In 2008 she received the Clarkson Laureate for public service at Massey College, University of Toronto. And in May 2008, she received the Lifetime Achievement Award from the Canadian Journalism Foundation. In March 2010, she became the fourth recipient of The Calgary Peace Prize.
She is the recipient of eight honorary doctorate degrees and is a Member of the Order of Canada.