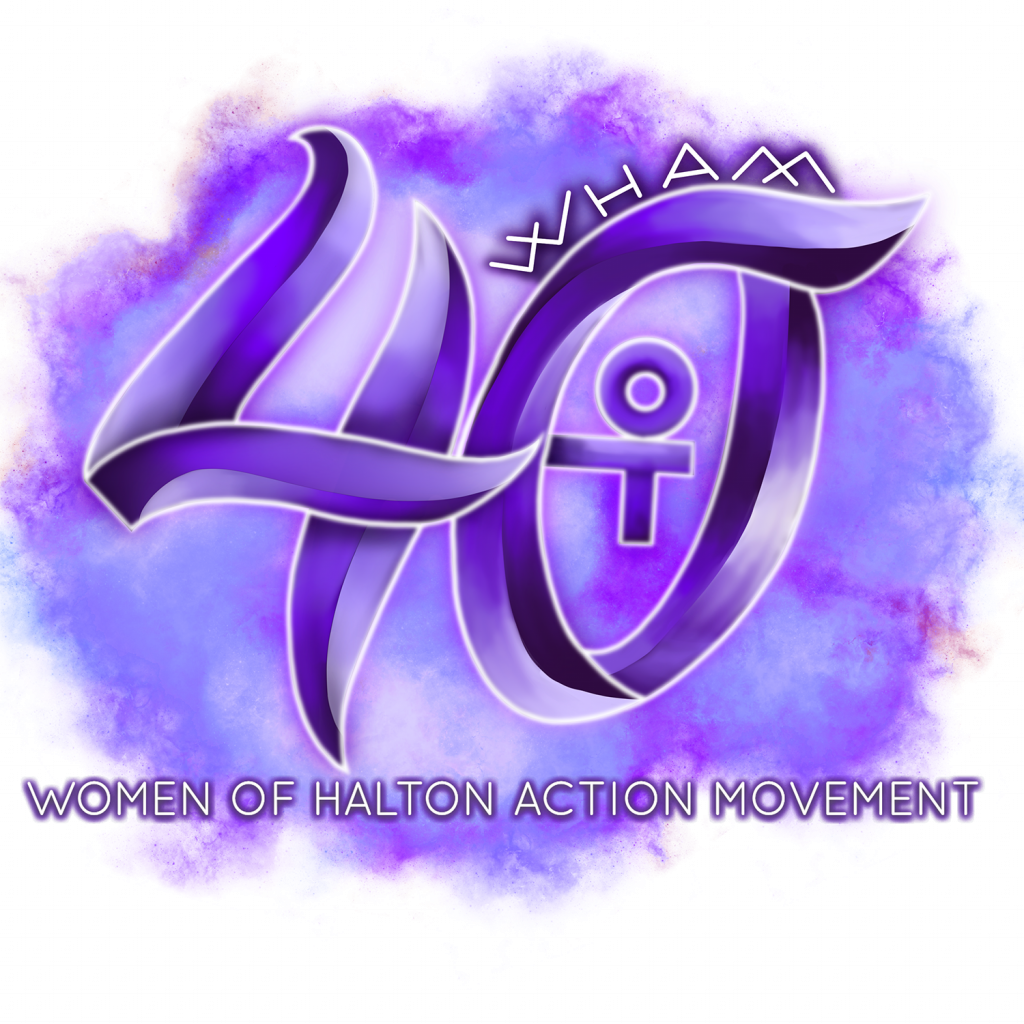 One of our recent themes for Canada’s International Women’s Day was:

#MyFeminism – quite simply Equality – equality for women, men and all gender identities where each is given the opportunity to reach their full potential.

This is what WHAM stands for.

Wham’s equality interests over the years have been on issues that were at the local, provincial, national and international level.

Some of the issues were specific to a certain time, place and topic, while others were more general and ongoing. Ongoing, even today.

"Until all of us have made it, none of us has made it."

For some of these issues we lobbied government at all levels, marched and demonstrated in public spaces, joined with other like-minded groups and individuals, supported others in their endeavours, educated ourselves, raised awareness with others, fundraised and in some cases, formed new groups to deal specifically with a particular issue. In 2008, we cooperated with others in Halton to start a coalition of over 25 groups called Advancement of Women Halton (AWH) dedicated to developing and implementing strategies to make gender equality a reality at home and abroad.

Some of these issues were resolved, some still have not been, and with others we continue to contribute to the ongoing dialogue and action.

As we all know, societal change can be slow and it takes time to change attitudes. Our progress was like the old saying, “Two steps forward and one step back.” But, during these 40 years, we have been guided by Rosemary Brown’s message. (As a reminder, Rosemary was the first black woman elected to a legislature in Canada). 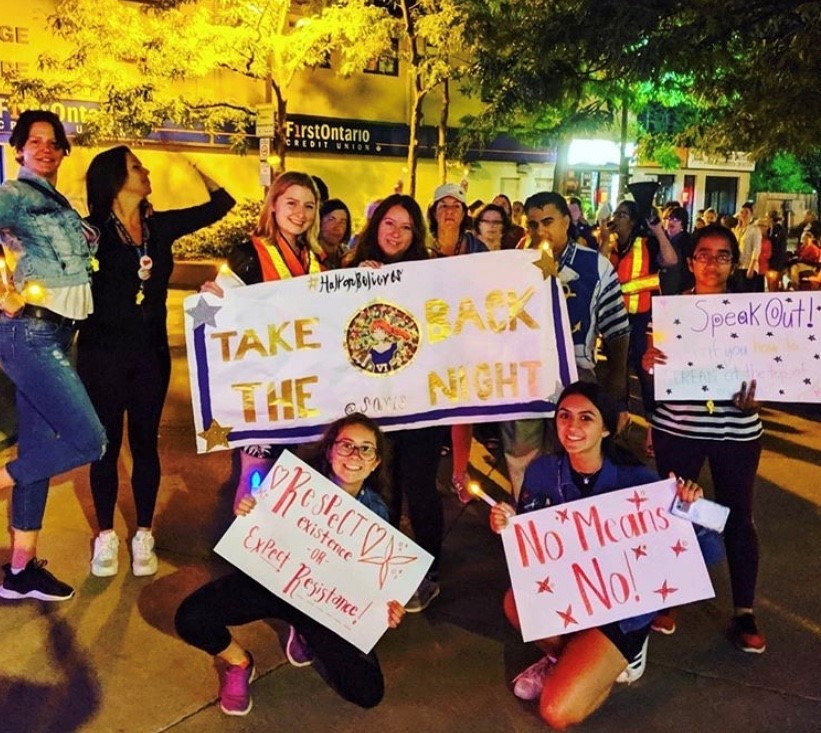 Poverty – The objective of poverty reduction is ongoing – WHAM has lobbied for many measures to lift all people out of poverty, especially Indigenous women, via campaigns for raising the minimum wage, establishing a national subsidized housing program, and the provision of equal pay for equal work. At the present time, we are strongly urging the federal government to support and implement a Guaranteed Annual Income. WHAM also feels that a National Childcare Program is essential to lift women out of poverty. This has been a goal since our inception. We are continuing to lobby our elected officials on this issue.

Politicians – We participated in consistent lobbying and interaction with elected officials at all levels, attended round tables and conferences, supported female candidates and any candidate having a feminist platform, developed questions on our issues for candidates at local meetings during elections, and picketed MP and MPP’s offices over specific legislation or the lack thereof. 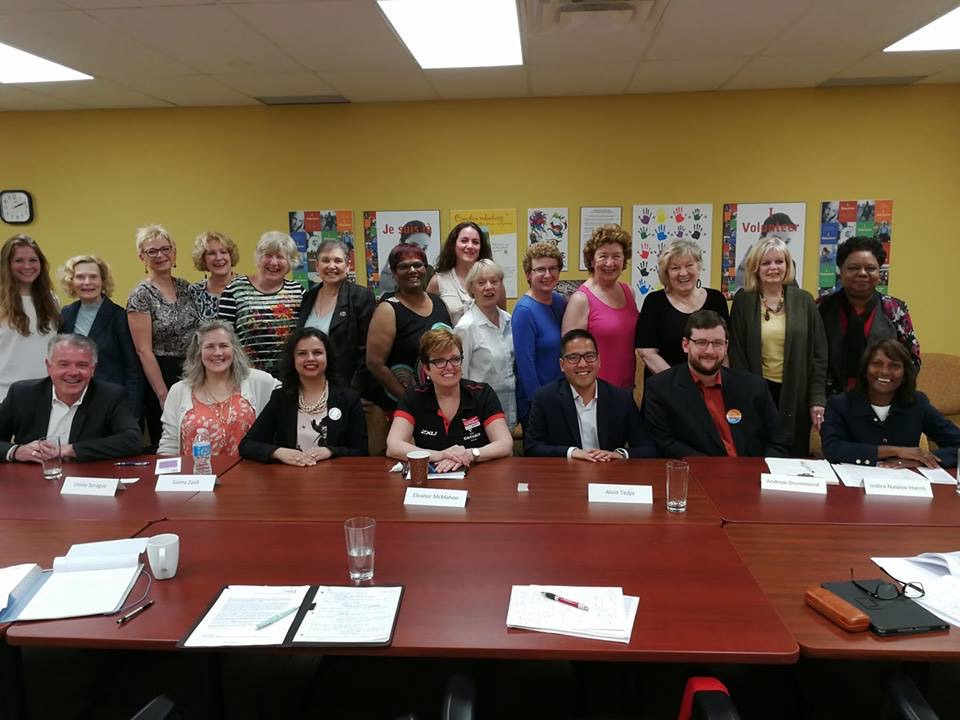 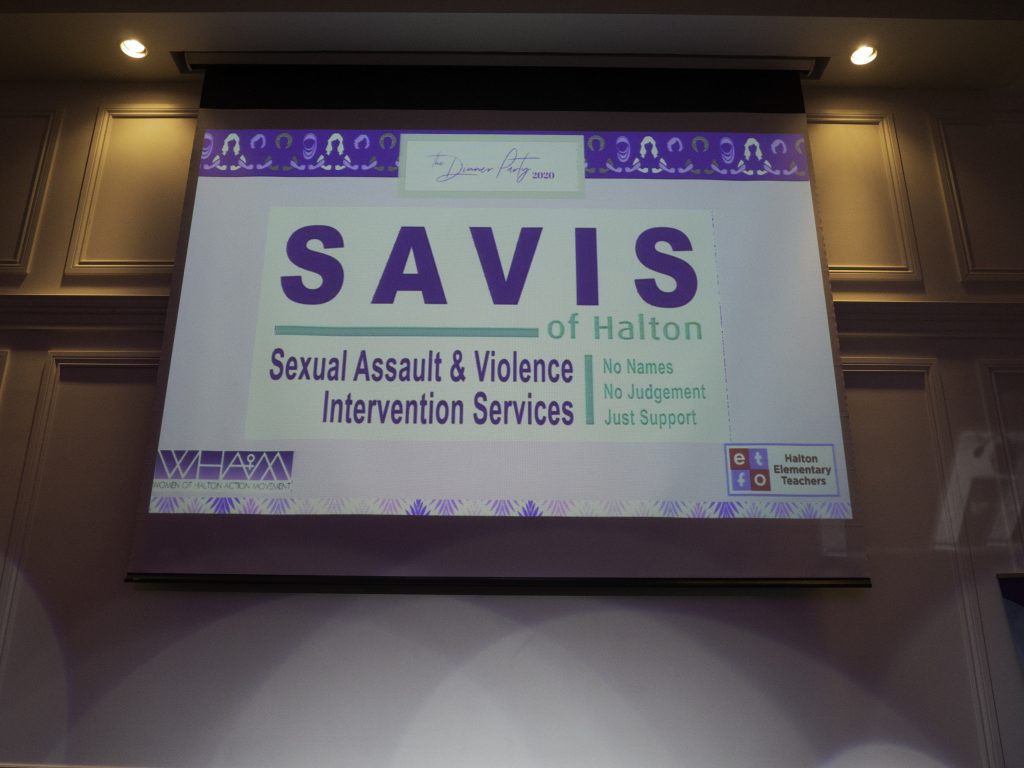 Gender Violence – We have consistently lobbied at all levels of government on behalf of women in particular, but also on behalf of all gender expression, identity or perceived gender. Specific issues have been rape, honour killing, bride burning, cyber bullying, pornography, sexual slavery, genital mutilation, infanticide and LGBTQ rights. In Canada, women continue to be objectified, measured by their appearance, sexually assaulted and killed by their partners. This is accomplished through various forms of violence, such as cyber, physical, sexual, psychological and emotional abuse. Following the Montreal Massacre at l’Ecole Polytechnique on December 6, 1989, we worked with other groups, in particular, the White Ribbon Campaign, to have this day commemorated as Canada’s National Day of Remembrance and Action on Violence Against Women and to hold local vigils each year. When it looked like our provincial government was seriously considering a recommendation to allow Sharia Law in Family Court arbitrations, we worked closely with the International Campaign Against Sharia Courts in Canada and were successful in persuading the government to dismiss this recommendation.

WHAM has supported the mandate of the Sexual Assault and Violence Intervention Services of Halton – SAVIS, and many of its members have served on their Board of Directors. We have assisted SAVIS in organizing Take Back the Night Walks to bring attention to the concern over women’s personal safety. WHAM has also raised funds for SAVIS through our annual celebration of the International Women’s Day Dinner – The Dinner Party. To date, this amount totals over $225,000.  We are thrilled that the #MeToo and #TimesUp campaigns and the World March of Women have taken off throughout the world and that victims are coming forward and being believed. WHAM members marched in the 2000 World March of Women in Ottawa and New York City as well as in the most recent 2017, 2018 and 2019 World Marches here in Toronto and in Washington, D.C.

Democratic Erosion – WHAM members have been supportive of electoral reform with the goal of everyone’s vote counting, as enunciated by Fair Vote Canada. We joined Equal Voice in their desire to have more women in elected government positions. WHAM was also instrumental in starting a new group called Reclaim Our Democratic Canadato continue working on this one important issue. 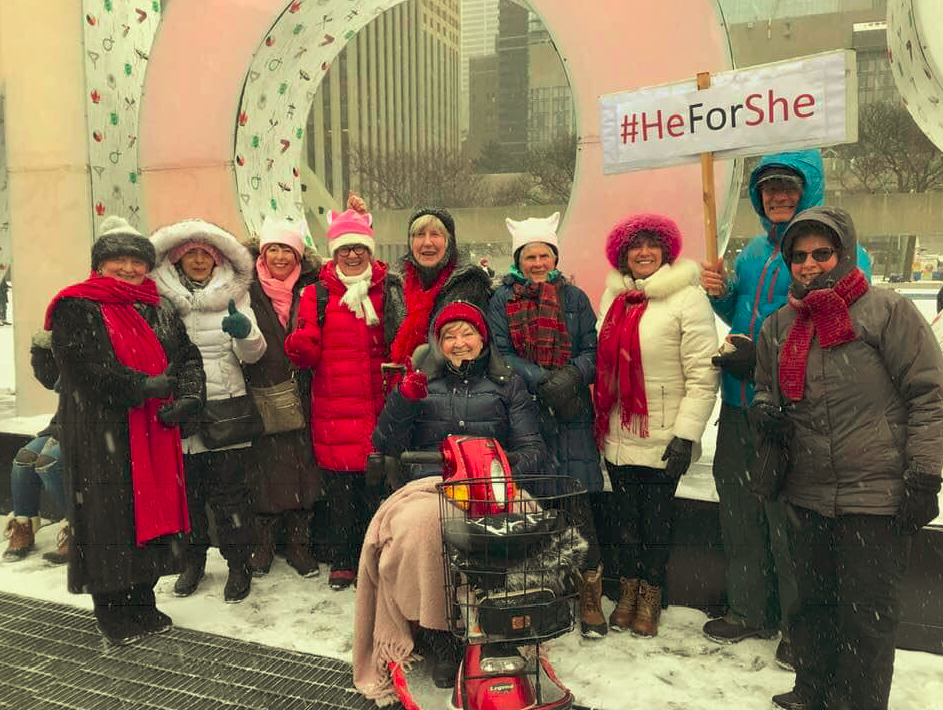 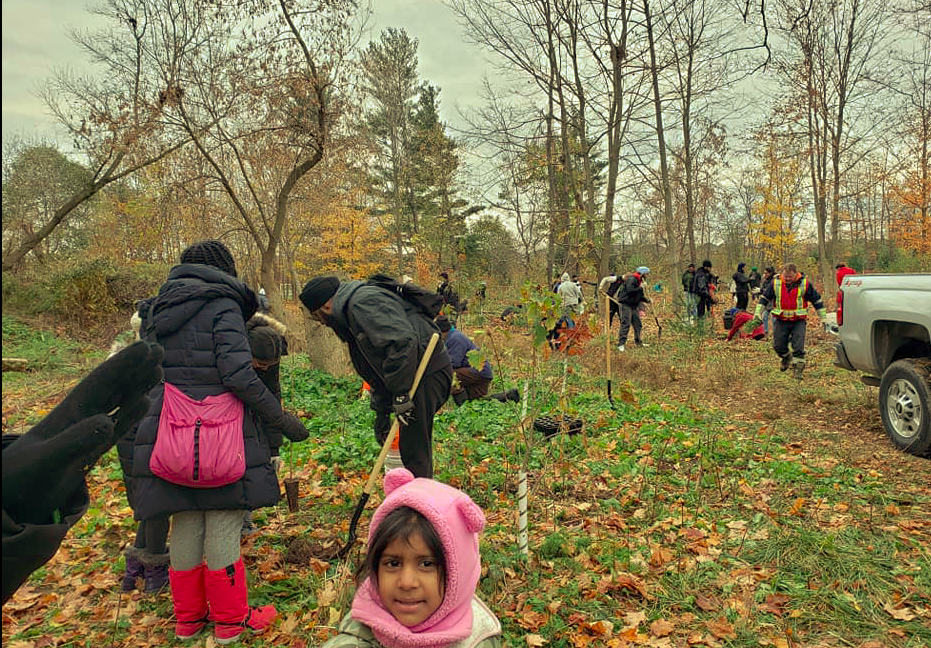 Environment – Support for all of our environment continues to be an issue that we fight for. In the early years WHAM members were active in setting up the Oakville Community Centre for Peace, Ecology and Human Rights and continue to support their endeavours from hosting Inuk mothers sharing their stories of youth suicide in their communities to efforts to inform the public on how to take action to protect their environment and their annual Eco Festival. We lobbied to rid our province of coal burning electrical power facilities and we were the first jurisdiction with a significant reliance on coal in North America to do so. This marks our 29th year of financially supporting the annual Earth Week Clean Up in Oakville.

Human Rights – We have advocated for Human Rights for all regardless of race, genre, ability, religion or sexual orientation since 9/11. We have contacted our political officials about people held in jail for long periods of time without being charged or given adequate access to our justice system and we have lobbied about the cancellation of the federal Court Challenge Program that has since been re-instated. Internationally, we were concerned about the heavy burden placed on African grandmothers as caregivers to their grandchildren as a result of the large number of parental deaths due to AIDS. This led to our establishment over twelve years ago of a new group called Oomama, part of the Stephen Lewis foundation’s Grandmother to Grandmother campaign.  Prior to that, in 1998, we were outraged over the loss of human rights for women and girls in Afghanistan under the Taliban and again started a new group to deal specifically with that problem.  Canadians in Support of Afghan Women was launched over twenty years ago. Today it has become the Halton chapter of the national organization, Canadian Women for Women in Afghanistan. Through the IWD Dinner Party, WHAM has raised $225,000 for CW4WAfgan. Through a partnership with the Zonta Club of Oakville, we have raised $39,000 for Zonta International to support women’s projects throughout the world.

A few years ago, WHAM formed an ad hoc group to educate ourselves and to take action on the rights and mistreatment of our Indigenous people. We joined with other local groups to initiate Sisters in Spirit annual events on October 4th and the Red Dress Project, specifically, to bring attention to the horrific violence perpetrated against Indigenous women and girls and the resulting murdered and missing Indigenous women. 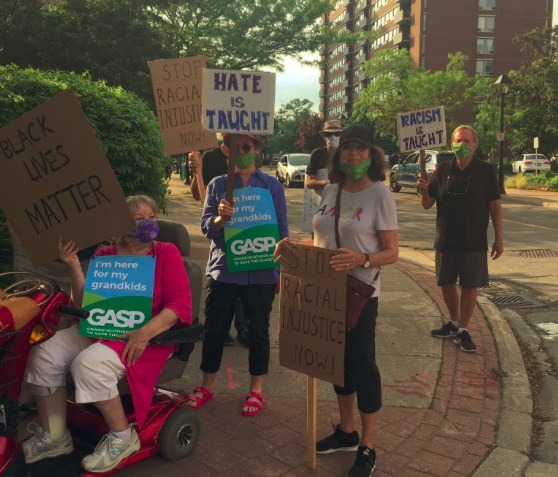 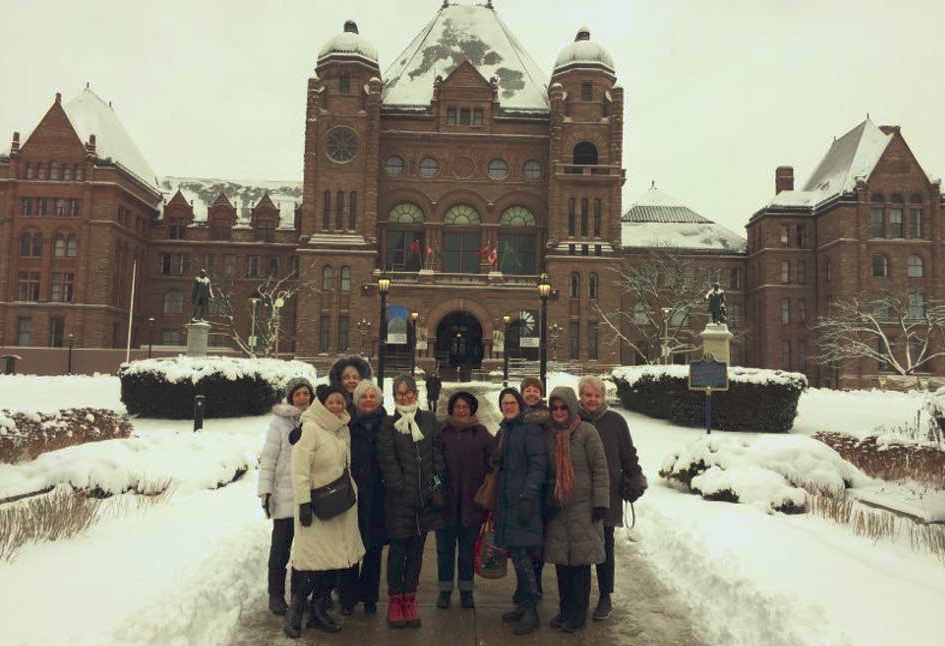 Peace – Canada’s role has shifted from peace keeping to that of a more combative role. WHAM questions the investment of money for this purpose, as opposed to more investment in reconstruction as a method of making peace. As well, we have lobbied to have more of our foreign aid directed toward programming for and by women. We were involved in protesting Canada’s involvement in the Iraqi war and continue to have concerns about Canada’s participation in the American missile defense program. A nuclear free world is our goal. Over the years, members have been active in developing peace vigils and festivals in cooperation with the Oakville Community Centre for Peace, Ecology and Human Rights.

Climate Crisis – In 2019, WHAM members joined together to study the issue of climate in crisis. There was unprecedented enthusiasm for learning about the state of affairs, making personal changes, and finally, affecting change. Starting out with 16 members, the group has grown to over 80 members. The name chosen was Grandmothers/Grandothers Act to Save the Planet (GASP) and a green mask was selected as their brand. Members gained knowledge from the Halton Environmental Network and joined forces with other local groups to build a Green network. Members interviewed every available candidate in Oakville, Oakville-North Burlington, Milton, Burlington and Halton Hills during the federal election campaign. Following the election, they again spoke with all elected MPs about their concerns. Working at the municipal level, they communicated with councillors, made delegations in favour of declaring a Climate Emergency in their communities, joined forces with young people by attending Friday for Future demonstrations, toured the Halton Waste Management and Recycling plant, demonstrated at the provincial legislature with the organizations Save Our Water and Wellington Water Watchers, and conducted massive mailing campaigns to MPPs, Canadian banks and the Ontario Teachers’ Pension Fund regarding the divestment of fossil fuel investments. www.gasp4change.ca 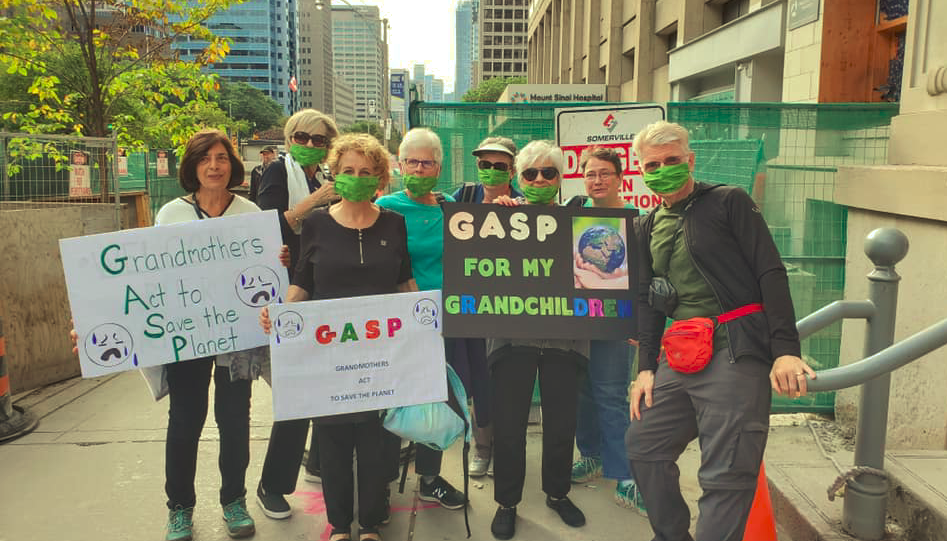 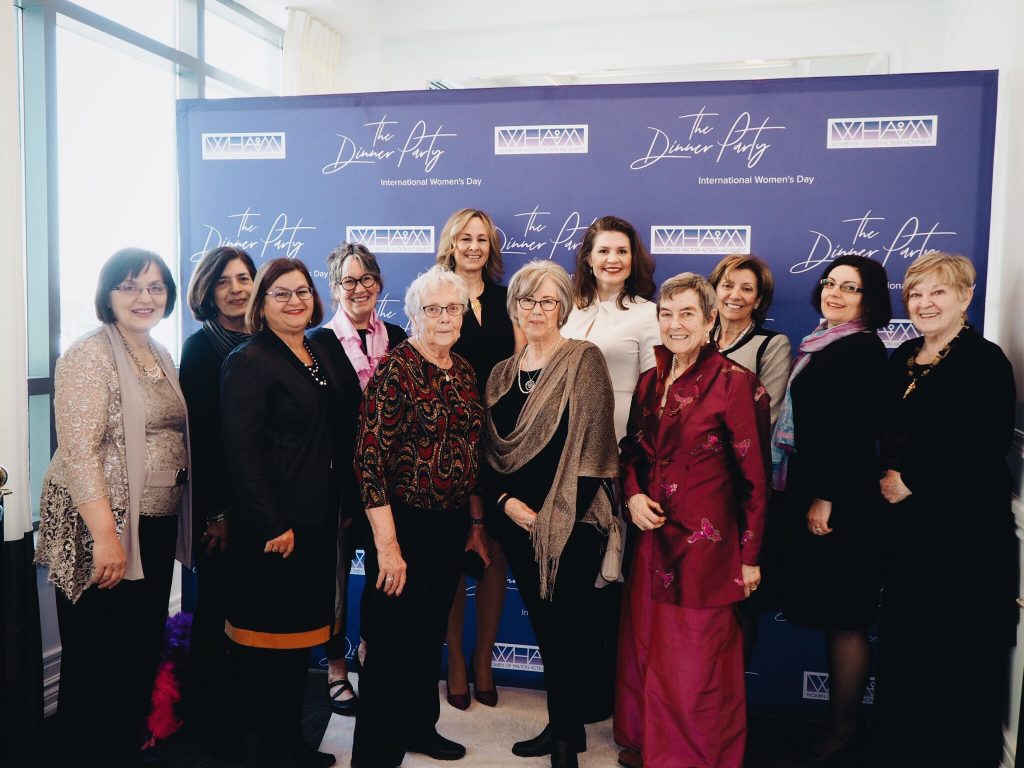 International Women’s Day – It is important to note that WHAM initiated a celebration of IWD in Halton over 20 years ago, at a time when there were no events happening locally. Our goals were to provide a special, but affordable evening for women to celebrate the successes that were taking place, to honour those who had led the way and to inform people of the challenges that we still face. Today, we have sold out crowds, entertainment and incredible speakers who enlighten us with their wisdom. In total, we have raised approximately $450,000 to assist women locally and internationally. This year we continue to celebrate with a virtual (Un) Dinner Party in honour of International Women’s Day.

“A right gained is not a right guaranteed. We must ever be diligent.”